The most cosmopolitan island of the Dodekanese, narrates stories from the past to the bright present! 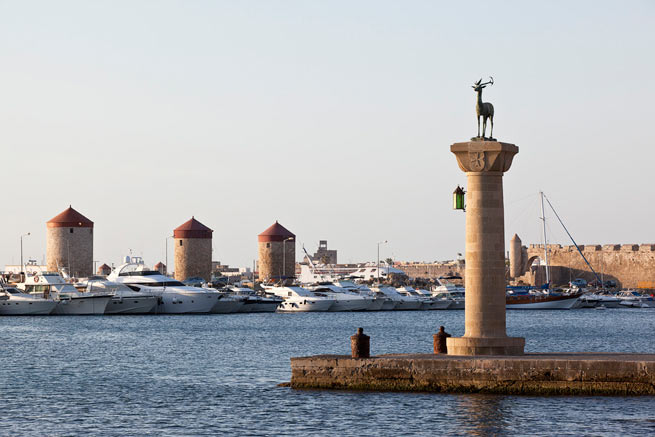 The diva of the Dodecanese! This is what we would call Rhodes. It is the capital island of the Dodecanese complex which perfectly combines cosmopolitanism and tradition, while preserving a rich natural environment. According to mythology, the creation of Rhodes island is attributed to the love of Zeus for a nymph named Rhodes, daughter of God Poseidon. The myth says that when Zeus saw Rhodes he was so enchanted by her virtues that he promised to never abandon her. Rhodes island is an all-time-favourite destination, for a great number of celebrities among which we distinguish Aristotle Onassis who showed his preference especially during the 60s.

Rhodes island gazes at the coast of Asia Minor clearly, as it is situated in the south-eastern part of the Aegean Sea much closer to the Turkish coasts than the Greek mainland. With an expanse of 1.400 sq. kilometres, it is - by all means - the largest island of the Dodecanese complex and the fourth largest in the country, providing the joys of a glorious coastline of 220 Km. It has a permanent population of more than 100.000 inhabitants who enjoy the island’s pleasant climate throughout the year.

As far as the origin of the island’s name is concerned, there are plenty of myths and legends. The most prevalent story explains that it was the Telchines who firstly inhabited the island and gave the current name. They were a peculiar tribe from Crete who had wings instead of legs and feet and they were very good at taking care of new-born and young gods. This is how mythic goddess named Rhea entrusted them with the upbringing of young Poseidon and that of Kapsita, daughter of Oceanus. When older, Poseidon mated with a Telchine named Alia and together they had 6 sons and one daughter. The daughter was of astonishing beauty and was named Rhodin. The island was named after her. 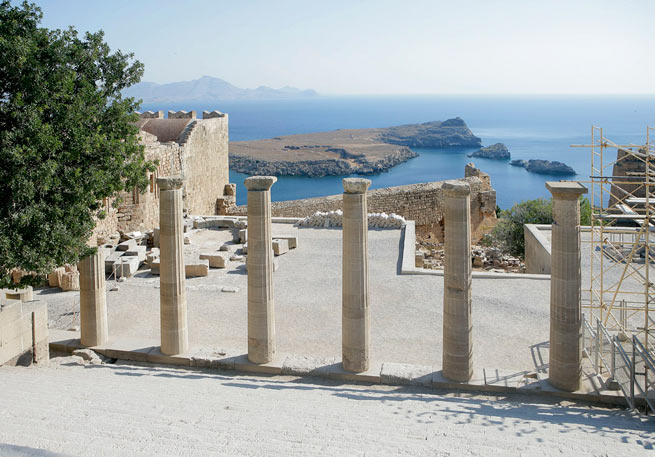 The island’s history dates as far back as 408 BC, when the creation of Rhodes Town is recorded, from the unification of the three cities of Ialisos, Kamiros and Lindos. Historians characterize it as "the most beautiful of Greek cities" presenting buildings of remarkable architecture, elaborate statues and numerous sites, such as: castles, temples, palaces, ancient Greek theaters, stadiums etc.

Rhodes island was the location of one of the Seven Wonders of the World...a massive bronze statue of God Helios (Apollo) named the “Colossus of Rhodes”, which was unfortunately destroyed by an earthquake in 224 BC leaving absolutely no traces today.

Rhodes island is a place of such rich history due to the plethora of civilizations which passed from its land and influenced it. It is no wonder that it is listed among the most famous destinations in Greece for sightseeing, presenting visitors with specimens of great diversity ranging from the Neolithic Era, the Minoans, the Bronze Age, the Mycenaean Greeks, the Persians, the Romans, the Byzantine Empire, the Knights and the Ottoman Empire...to mention just a few. It was not before 1948 that the Treaty of Paris was signed and embodied Rhodes island (alongside the rest of the Dodecanese complex) back into Greek territory.

Rhodes today - Getting acquainted with the island

The island was conquered and influenced by so many different cultures and civilisations, that it would be impossible not to amaze its visitors by its cosmopolitan aura and the continuously alternating images! You will be enchanted by the medieval Old town of Rhodes and the beauties of the picturesque villages in its mountainous interior. Unlike other islands of the Aegean Sea, Rhodes has a rich flora of pine and cypress forests plus arable areas where citrus fruits, olives, wine grapes and other vegetables are cultivated. The island has a coastline of 220 Km presenting numerous beaches with sparking blue waters and five different ports. With over 300 days of sunshine and an excellent tourist infrastructure, it is a destination worthy of your visit during any season of the year. 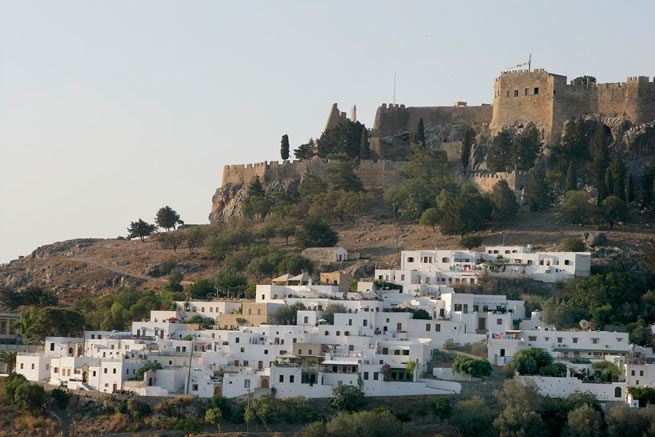 The stunning area of Lindos is one of the most known of the island and it lies on the east coast at approximately 50 Km from the town of Rhodes. This is where you will capture images which resemble more to the Cycladic style rather than the Dodecanese one. The settlement is located on a beautiful bay with a sandy beach and it is built amphitheatrically below the rock of the ancient Acropolis (natural citadel) of Lindos, offering specimens of notable archaeological sites, as well as, breathtaking views to the distant ports and the endless coastlines of the island.

When you visit it, leave your car at the central parking and choose to explore its labyrinth-like alleys on foot by keeping the central square with the big pine tree as your point of orientation. Fill your days with swimming and sunbathing sessions at the large main sandy beach of Lindos, while gazing at the picturesque white houses of the settlement above you. Enjoy your early evening walks ascending to the ancient Acropolis for breathtaking views and unprecedented sentiments of tranquillity and leave the night strolls -within the settlement- for the evening...taking in as much of the fragrances from the blossoming yards as you can and for discovering the merchandise of the numerous stores in every alley. This small village in Rhodes will acquire a small corner in your hearts forever...

Tip: It may be a Greek holiday cliché, but do hire a donkey which will take you up to the ancient Acropolis of Lindos. This will definitely constitute the most traditional tour you have ever taken! Donkeys are available to rent for a ride at the central square of Lindos from early morning and up until 6 in the afternoon.

The unique location of the hotel, the respect towards the architecture of the medieval town and the luxurious amenities it...

Join the 4th International Roads to Rhodes Marathon on the 9th of April 2017 and experience all the ancient and medieval history...

Summer weekends are offered for a memorable escape to Rhodes and the hotel that will introduce you to the Medieval atmosphere of...

On Holy Spirit holiday, escape to Rhodes and the hotel that will introduce you to the Medieval atmosphere of the Old City, Avalon...