Did you know that…

As the years go by, the Cyclades open up little by little and let us in their secret world. Really, how many of their secrets are you aware of? Read the lines that follow and find out exclusive information that will make you want to book your next vacation without any delay...

• The Cyclades take their name from the word cycle or circle, possibly due to the fact that as ships were approaching the islands they had to move in a rotating manner to avoid the strong winds, or, due to the circular layout around Delos which was considered the sacred island of antiquity.
• In Greek mythology the Cyclades are indicated as nymphs - the daughters of Oceanus and Tithyos - which Poseidon transformed into islands because they made him angry!
• We come across the term "Cyclades" in 5th century BC by Herodotus for the first time. According to historical sources the first inhabitants of the Cyclades were the Karres, the Leleyies and the Phoenicians.
• The legendary “Cycladic civilization” was born around 9000 BC and many artifacts of unique value on a world scale have already been discovered. 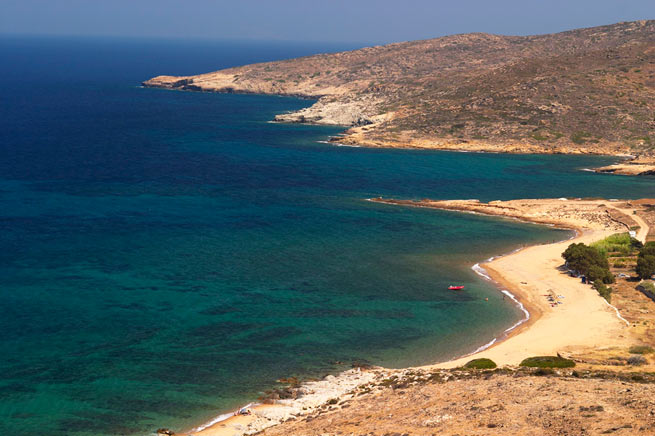 Secrets of the present day…

• Ios island...It used to be an outsider, but only a few people know that the island’s beaches are of inconceivable beauty and of great appeal to even the most demanding visitors. If we told you that many scenes of the film “Blue Lagoon” were shot in Ios island, would you believe it?

• The sunset views from the Caldera in the islandof Santorini, constitute a truly unique phenomenon worldwide! You might try and find them somewhere else...but you simply won’t.

• In Andros island, the island of culture and nobility, is where Strofila plateau right in the heart of the island is located and where the largest preserved Neolithic settlement of the Aegean sea has been discovered. Among other findings, especially interesting are the oldest rock sculptures in Greece depicting animals, ships and linear shapes.

• For food lovers who will visit Andros island, don’t forget to taste the traditional "fourtalia" (omelet with local sausage) as well as the mouth watering local cheeses, such as “petroti”, “volaki” and “malachto” accompanied with Synetiano wine!

• During your stay in the cosmopolitan island of Mykonos, get ready to come across some world class celebrities! Needless to say that the island also has completely remote landscapes which will make you feel as if you are stranded on a deserted island.

• Sifnos island features an open-air museum which is none other than the island’s Castle! The settlement of Kastro -as it is called- is built according to the medieval system and bears hallmarks of a typical Venetian fort. The most interesting information about it though, is that it has been continuously inhabited from prehistoric times until today!

Once In Mykonos, Double the Offer!

The unexpected enchanting side of Mykonos Island