The most beautiful island in the world proves that no matter how many awards it may win, they will never be enough! 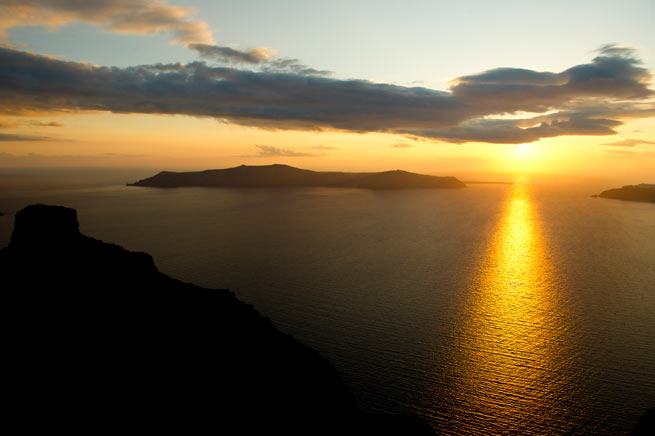 Santorini, is an island that constitutes a top international destination and is seen in personal wishlists of millions of people worldwide. The most beautiful island in the world proves that no matter how many awards it may win, they will never be enough!

Dove-white houses, sea of cobalt blue, volcanic sands...Step into the painting of a talented artist’s rendering of perfection whether you are visiting for relaxation or for the adventure of it.

This tiny Greek island located among numerous other in the Aegean Sea, is distinguished by wild geological beauty and rich history which even involves volcanic eruptions. The landscapes will overwhelm you, the sunsets will enchant you, the history will fascinate you. You are bound to become yet another fanatic, capturing majestic images with your camera that you will not find elsewhere in the world. 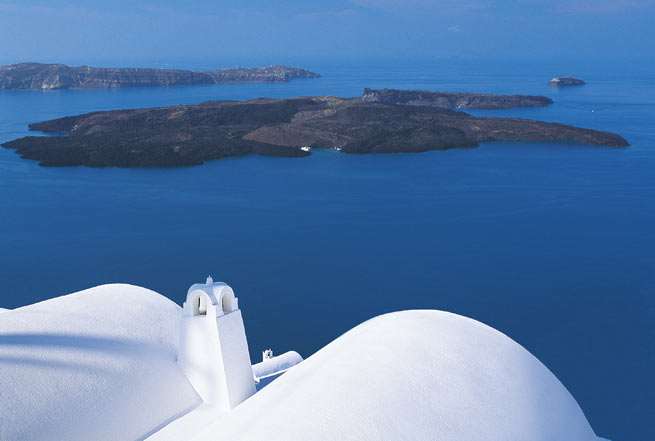 Santorini presents an amalgam of alternating landscapes where the colors of red, black and white formulate a magnificent mosaic. The island acquired a half-moon shape in 1645 BC when the volcano in its center erupted. It used to have a round shape back in history but now constitutes a complex of five islands with Santorini being the larger and then Thirassia, Aspronissi and the volcanic islands of Palea and Nea Kameni giving it a totally different dimension.

What shaped the once round island into a half-moon shaped one with breathtaking steep cliffs called the Caldera and a lagoon looking sea between it and its former four parts, is a series of enormous volcanic explosions. Its geological energy and its supreme wild beauty contribute to why it is ranked as a top worldwide destination.

Did you know that... 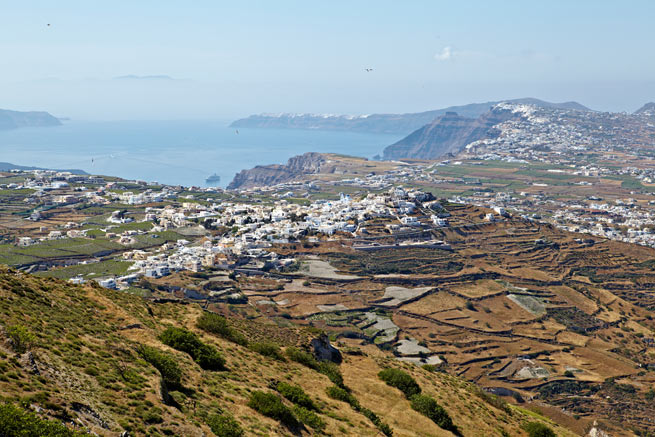 Despite its volcanic past, Santorini was populated by many civilizations in different Eras:

Neolithic Period, Minoans, Phoenicians, Lacedaemonians, the Hellenistic Period when it also became an important trade center and significant naval base, the Byzantine Empire, the Roman Empire, the Venetians, crusaders, pirates and finally the Ottoman rule from which it became independent in 1821 and was united with Greece in 1830.

All of those tribes and eras have left their mark on the island. While visiting the island, aim at discovering the significant archaeological sites and get a taste of its wealthy history.

Approaching the phenomenal island on boat

The Santorinian Caldera cliff has a height of 300 meters and a length of about 30 Km. In approaching the island on boat, we become the spectators of a phenomenal landscape that words cannot describe. In order to reach the port, the boat passes under the Caldera cliffs which boast the totality of the volcanic eruptions and earthquakes manifested in the form of layers of solidified lava one on top of the other.

On top of the Caldera, we count four distinct whitewashed settlements that look like luminous diamonds from below: Oia, Imerovigli, Fira and Akrotiri. 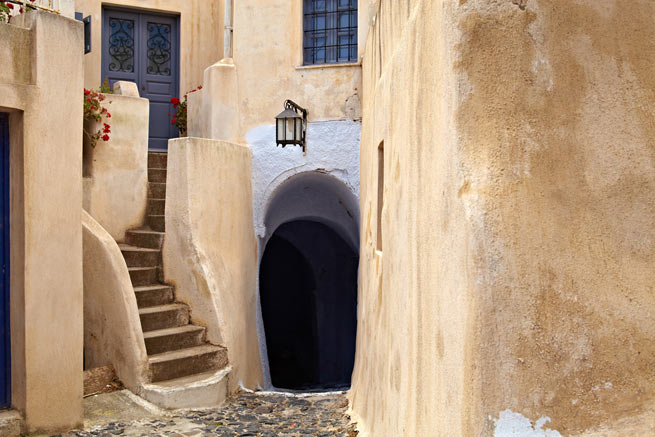 The four major settlements - Akrotiri, Fira, Imerovigli and Oia - all cherish housed Museums and open-space Museums. Both types together, represent the island's history and culture covering the archaeological aspect, the medieval times, the naval history and the musical culture as part of an ever-changing civilization.

In the settlement of Akrotiri, we feast our eyes to the "open museum" of Ancient Akrotiri depicting urban life in the Minoan period. Excavations have brought into light elaborate architecture, vivid frescoes, 40 buildings, the ancient city's main street with stores and warehouses, countless vases, pots and tools.

In the capital Fira, we visit the Archaeological Museum to see great findings of the flourishing periods of Santorini. Sculptures, marble statues and figurines, inscriptions, ceramics and pottery masterpieces.

We continue along the Caldera to reach Imerovigli and Skaros rock, another "open museum" of a majestic medieval castle ruined by multiple earthquakes and a volcanic eruption. Skaros was once the capital and the castle protected everyone from pirate raids and was never conquered during its 600 years of existence.

Finally, in Oia we visit the Naval Museum hosting maritime items and rare documents of its rich naval past and presence and the Museum of ancient, Byzantine and post-Byzantine musical instruments from 2,800 B.C. till the early 20th century.

Pyrgos and the mainland's beautiful villages

The villages in the interior of Santorini are absolutely worthy to see for their beauty and picturesque architectural character but also in order to experience the traditional, local feasts and festivities of religious genre presenting visitors with local delicacies, plenty of local wine and folklore music and dancing. 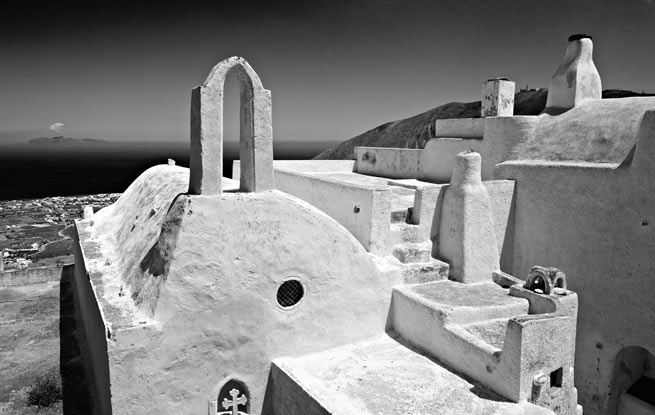 Emporio village has a strong medieval character with well-preserved traditional houses. Karterados is a picturesque village distinguished by unique architecture of 19th century elegant ship-owner mansions and beautiful landscapes of vineyards. Megalohori lies on a hill creating a labyrinth of steep alleys and streets and surrounded by uncountable vineyards. Adore its white Cycladic houses, the numerous churches and a divine main square. Vothonas presents traditional houses carved out of rocks and white domed churches along its stone-paved alleys. The local festivals of Aghia Anna church and the chapel of Panagia Tripa will introduce you to the essence of Santorini's traditions. Messaria is a quaint village surrounded by vineyards with magnificent neoclassical buildings and restored mansions. Drink Greek coffee at its main square under the trees. Mesa and Exo Gonia villages cherish the Byzantine church of Panagia Episkopi and traditional houses.

Last but not least, the medieval settlement of Pyrgos up on a hill with panoramic views of the island, presents traditional houses built around the Venetian castle and significant churches such as Theotokaki, Aghia Triada, Aghia Theodosia and that of Archangel Michael. Do not omit to see the night turn into day during the annual representation of the volcano eruption at the end of August with use of large quantities of fireworks. The perfectly preserved and unique medieval settlement of Pyrgos is the location of Voreina Gallery Suites. With absolute respect towards the conservation of the village’s traditions, Voreina Gallery Suites maintains the bold architectural lines that have come to form the quintessential Cycladic landscape. Quality and taste are clearly prioritized here.

*There are daily flights and ferry routes to Santorini from Athens.

The awarded Astra Suites in Santorini won the title "Independent Hotel Partner of the year" in Europe, at the awards of Classic...

The extraordinary Astra Suites in Santorini won one more award, at the trivago Awards 2018!

With a view to the Caldera at the most romantic hotel of Santorini: Amazing photos

The Astra Suites at Imerovigli shows you the way and spoils you with its Luxury Suite Collection. Discover the most impressive...

Astra Suites in Santorini needs no introduction. The brand-new award of Astra Suites as Greece's "Leading All Suite Hotel 2017"...

It resembles to a heavenly place all dressed in white and offers luxurious amenities and services that satisfy the most...